Keep up with Gail
Signup for Newsletter
Contact Gail
May Wallpaper 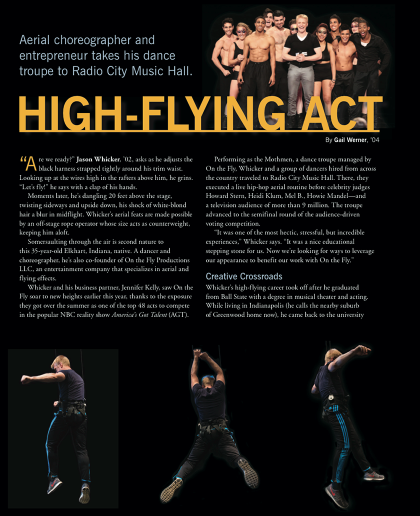 “Are we ready?” Jason Whicker, ’02, asks as he adjusts the black harness strapped tighlty around his trim waist. Looking up at the wires high in the rafters above him, he grins. “Let’s fly!” he says with a clap of his hands.

Moments later, he’s dangling 20 feet above the stage, twisting sideways and upside down, his shock of white-blond hair a blur in midflight. Whicker’s aerial feats are made possible by an off-stage rope operator whose size acts as counterweight, keeping him aloft.

Somersaulting through the air is second nature to this 35-year-old Elkhart, Indiana, native. A dancer and choreographer, he’s also co-founder of On the Fly Productions LLC, an entertainment company that specializes in aerial and flying effects. READ MORE 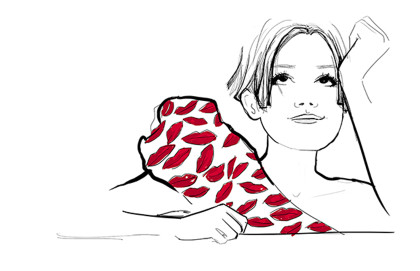 Earlier this month, I talked my hair stylist into giving me more than my usual trim. As she went to work taking eight inches off my blonde locks, I felt a cool breeze hit the back of my neck. When she turned me around to face the mirror, I admit it wasn’t excitement I felt at first so much as confusion, catching a glimpse of my newly shorn locks wondering, “What have I just done?” READ MORE 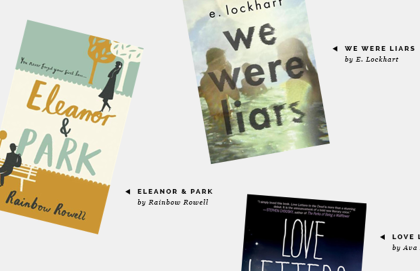 Young adult fiction is not only the hottest genre in all of publishing these days, but it’s also quickly becoming the most powerful influencer at the box office. From The Hunger Games and Divergent series to the summer tearjerker that is John Green’s The Fault in Our Stars (not to mention the upcoming release of the nineties dystopian classic The Giver), this is one pop culture takeover we recommend getting on board with. READ MORE 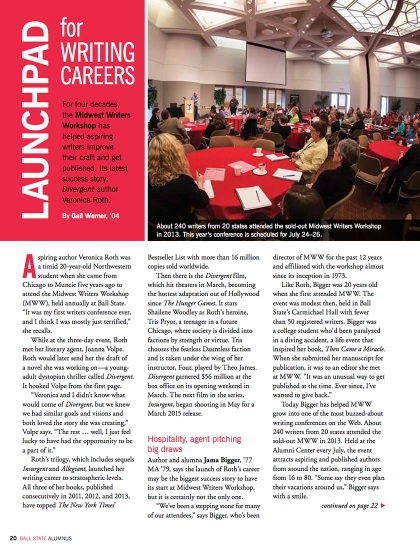 Aspiring author Veronica Roth was a timid 20-year-old Northwestern student when she came from Chicago to Muncie five years ago to attend the Midwest Writers Workshop (MWW), held annually at Ball State. “It was my first writers conference ever, and I think I was mostly just terrified,” she recalls.

While at the three-day event, Roth met her literary agent, Joanna Volpe. Roth would later send her the draft of a novel she was working on—a young-adult dystopian thriller called Divergent. It hooked Volpe from the first page. READ MORE 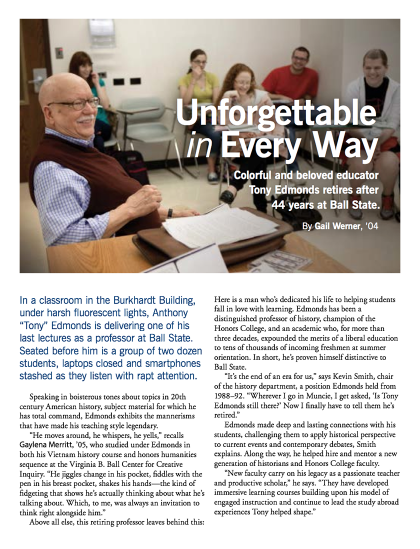 Unforgettable in Every Way

In a classroom in the Burkhardt Building, under harsh fluroescent lights, Anthony “Tony” Edmonds is delivering one of his last lectures as a professor at Ball State. Seated before him is a group of two dozen students, laptops closed and smartphones stashed as they listen with rapt attention.

Speaking in boisterous tones about topics in 20th century American history, subject material for which he has total command, Edmonds exhibits the mannerisms that have made his teaching style legendary. READ MORE