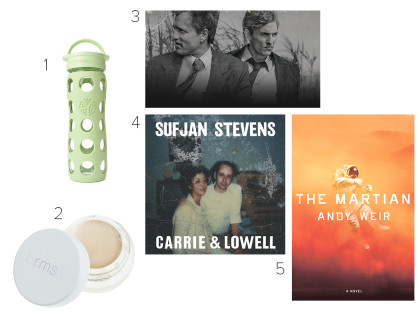 On my List of Good Intentions, this post was ready mid-week last week (you know, when it was still April). Then a virus my son had hit me so hard, I was out of it for six days (during which I also came down with pink eye—#girlcantwin). Now that I’m back up to speed, I couldn’t help but belatedly hit the “Publish” button. Enjoy and let me know if you’re a fan of anything you see here too!

1) Life Factory Water Bottle: I’m an H20 junkie. When the mouthpiece on my tried and true Camelback Eddy split, I decided to give a glass bottle a go and now I can’t go back. It’s a small thing to some, but the whole “no aftertaste” effect of drinking from a glass bottle is a huge win for this water girl.

2) RMS Luminizer: Awhile back, my favorite blogger, Joanna Goddard, posted about the J.Crew show at NYFW. My eyes caught the mention of how the models use this incredible luminizer, and, maybe because it was the dead of winter, I wanted that same glow too. Impulsively, I bought the stuff and have gotten into a perfect groove of applying it (dab a finger in moisturizer, rub it in, dab a finger in this and apply over cheeks). When I’m wearing it, I really do feel as if my whole face lights up. It’s not cheap for a beauty product, but a little goes a long way so I’ve designated it a worthy splurge.

3) HBO’s True Detective: Earlier this month I saw a trailer for the second season of this gritty drama (that song! so good!) and given it stars my favorite actress (Rachel McAdams) AND FNL’s Tim Riggins (ahem, Taylor Kitsch), I wanted in and so Nick and I have been catching up on the first season. Matthew McConaughey dominates the show, proving he really is one of the best actors in the biz today. (We’ve got four episodes left of this, so no spoilers please!)

4) Sufjan Stevens’ Carrie & Lowell: Stevens’ voice has such a mesmerizing effect on me. His new album may be his best yet, a haunting ode to his dead mother. I like what this critic has to say about Stevens: “If he is not the Shakespeare of our time, he may be its Flannery O’Connor, its William Wordsworth, even its Dante. There are albums and then there are works of art; Carrie & Lowell is firmly in the latter camp. It is on par with the greatest work of Dylan, and the great works of literature.” Sample here

5) The Martian by Andy Weir: It took me a few chapters to get into this sci-fi page-turner (it’s front-loaded with a lot of geeky scientific exposition), but once I did, I couldn’t put it down. As I mentioned in my GoodReads review, I can’t imagine the pins-and-needles drama of watching the Apollo astronauts walk on the moon. This book gave me a glimpse of what it might have been like. Also, the movie version looks to be AMAZING. (That cast! I couldn’t have dreamed up a better one!)